Once upon a time in a universe far away (actually it was here in Scotland) there was a wee knitwear business called Blackhouse Knitwear. Between 1986 and 2001 it designed made and sold around 100,000 bobble hats which appeared in around 150 retail outlets in Britain and were exported all over the world. One was even in the movies - Peter O'Toole wore one in the movie 'Venus'.

Susan Calman has recently worn one of my hats in her 2021 Channel 5 series 'Grand Day Out' which has resulted in a LOT of interest and orders being placed for Woollyhatz. Many thanks to all who have bought hats from me. I am a one woman business and have been overwhelmed with the response! Usually I am able to get hats made and posted (and I always use Frst Class mail) within a week but at the moment due to volume of work this is taking a bit longer. I would hope to be able to dispatch your bobble hat order within 2 weeks of your order and if its longer than this I will let you know.

Due to a combination of Brexit and Covid I'm having problems getting hold of the yarn I use for my jazzy crocheted hats. I'm trying to chivvy along my suppliers but again, bear with me which I get everything sorted.

Thanks to all (especially Susan Calman) for your support - and your patience!

In the early 2000s owner Ceci moved on to other challenges. Time passed. After a sabbatical working at Benmore Botanic Garden managing the shop and ticket office and as a Countryside Ranger for Loch Lomond and the Trossachs National Park Ceci took early retirement in 2012 to work as a self-employed Celebrant conducting legal wedding ceremonies, funerals and child namings (more details on www.ecospirit.co.uk), have a bash at self-sufficiency, and to get back to being more creative.

Ceci has always been up for a challenge and in the past has turned her hands to a variety of occupations. She started off studying for a B.Sc. In Environmental Sciences at UEA, Norwich, moved up to Glasgow for a post-graduate Diploma in Land Surveying, and then when suitable employment was sadly lacking worked in the computer industry for a couple of years before starting her knitwear business in 1986. Since then she has studied and practiced holistic therapies, taught belly dancing, gained a Permaculture Design Certificate, an MA in Ancient Studies (archaeology, Egyptology and Classics) from Glasgow University and latterly, a Diploma in Funeral Celebrancy. She even wound up, with her travel buddy Denise, on Channel 4’s ‘Coach Trip’ with Brendan Sheerin. 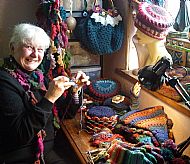 Recently Ceci has resurrected her skills in crochet that she’d learned in childhood and began developing a range of hats, scarves, shawls and other accessories using fabulous shades of an acrylic/wool blend of yarn which combines warmth as well as being very soft to wear. The hats are made in a variety of original wacky designs and have proved to be very popular at craft fairs and in craft outlets including 'Conic Crafts' of Drymen, a collective of local artists and craft workers. ‘Woollyhatz’ also exhibited at Cowal Open Studios in September 2018 and 2019 at Strachur Smiddy Museum and Craft Shop.

By popular request, Ceci has also resumed making her 100% supersoft wool bobble hats in a range of designs. There are some based on traditional fairisle patterns, a selection of picture knits based on the landscapes of Scotland, and a variety of Celtic designs. All are made in Ceci’s workshop in Dunoon and are double thickness for warmth and are available through this website, through local craft fairs, and a selection of retail shops (if you would like to become a trade customer then please do contact us for details of how to open an account).